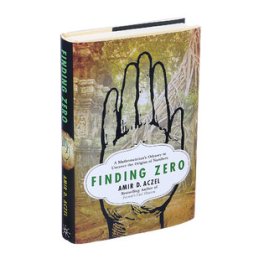 Finding Zero: A Mathematician’s Odyssey to Uncover the Origins of Numbers. By Amir Aczel.
Palgrave Macmillan Trade. 256 pages. $26. Credit Sonny Figueroa/The New York Times
Most tourists who venture to the tiny town of Khajuraho in northern India are drawn there by the thousand-year-old Jain and Hindu temples, especially the scandalously explicit sex depicted in the statues adorning the walls.

But when the author and mathematician Amir Aczel visited in January 2011, he was looking for something else. After wandering the temple complex for hours, he found it: Tucked behind a doorway framed by an amorous couple was a four by four “magic square” carved into the wall.

Among the 16 numbers making up the square was a familiar-looking “10,” written in easily recognizable Hindu numerals. It is one of the earliest known representations of the numeral zero.

“Finding Zero” is Dr. Aczel’s story of his quest for the origins of the most elusive of numbers: zero. It is zero, Dr. Aczel points out, that makes our place-value number system possible. Without it, there is no way to distinguish among 48, 480 and 4,080. Zero is indispensable for our familiar arithmetical operations, and it is half of the binary language of modern computers.

And yet, even though we can hardly imagine life without it, Europeans had no concept of zero until the 13th century, when they referred to it as and Indian or Arabic numeral. Where then did this epoch-making concept originate?

Determined to find out, Dr. Aczel turns to the East.

Dating from 954, the magic square at Khajuraho predates European zeros by a full three centuries, and yet it is not the oldest confirmed zero in India. This can be found the city of Gwalior, where a temple inscription from 876 records a grant of land 270 “hastas” long.

But Dr. Aczel is looking for something even older: The date of the Gwalior zero, he worries, is contemporaneous with the Baghdad Caliphate, which might lend credence to the theory that the zero was transmitted to India from the West by Arab traders.

Although this claim was prevalent among scholars in the early 20th century, Dr. Aczel considers this claim European bigotry. The zero, he has no doubt, is the creation of what he calls “the Eastern mind.”

Westerners, according to Dr. Aczel, have mainly used numbers for commerce and other utilitarian purposes. Zero, however, is not just a useful symbol, but a paradox — a sign that represents absence, or “something” that is also “nothing.” Little wonder, he believes, that the practical-minded Europeans never stumbled upon it.

In Eastern thought, however, the rigid oppositions between existence and nonexistence are blurred, allowing for intermediate states such as “neither existing nor not existing.” This fluidity, Dr. Aczel believes, allows for the startling juxtaposition of mathematics and sex at Khajuraho. More profoundly, it accounts for “shunyata,” the positive emptiness that is the goal of Buddhist meditation. And zero, in Hindi, is “shunya.”

Dr. Aczel’s connections between early zeros and Eastern thought are powerful, but his opposition of East and West suggests that he might be guilty of some Western binarism himself. One need consider only that the Pythagoreans, founders of the Western mathematical tradition, were a religious cult to realize that the mystical use of numbers was far from unknown in the West.

Conversely, the recording of dates and measurements in Gwalior and elsewhere suggests that ancient Indians could be as practical in their use of numbers as Europeans. Furthermore, exchanges between the Indian subcontinent and the Mediterranean world date to at least to the Persian Achaemenid Empire, more than a thousand years before the Baghdad Caliphate.

Ideas circulate and are reinterpreted in different contexts. The quest for the pure original zero may well be a lost cause.

Yet “Finding Zero” is a captivating story, not just an intellectual quest but a personal one. Dr. Aczel’s passion for numbers goes back to his childhood, when he sailed the Mediterranean as the son of the captain of Israel’s glamorous cruiseliner, the Theodor Herzl. During port calls, he bonded with Laci, his father’s steward, who at one time had been a mathematics doctoral student in Moscow.

From Laci, he learned that numbers were an astounding intellectual achievement, perhaps the greatest in history. How did such abstractions arise in the human mind? And where did the systems to represent them come from?

Back in 1929, Dr. Aczel learns, the French archaeologist George Coedès translated an inscription found in the ruins of a Cambodian temple, which includes the date 605, equivalent to A.D. 683 . The discovery was celebrated at the time, but the inscription had since been lost, quite possibly destroyed by the Khmer Rouge.

Determined to track it down, Dr. Aczel hunts for clues in Thailand, Cambodia, Laos and Vietnam, slowly piecing together the likely whereabouts of the stele.

In the climactic scene of the book, Dr. Aczel finds himself in an antiquities storage shed a few miles from the famous Cambodian temples of Angkor Wat. After wandering for hours in sweltering heat among rows of broken and discarded archeological artifacts, he comes across a large stone with an inscription. And there, clearly discernable, was the oldest known zero, lost for nearly a century.

Did Dr. Aczel rediscover the true origins of zero? That is questionable. But his tale is gripping, filled with the passion and wonder of numbers.

Amir Alexander is the author of “Infinitesimal: How a Dangerous Mathematical Theory Shaped the Modern World.”

A version of this article appears in print on April 21, 2015, on page D3 of the New York edition with the headline: A Long Quest for Naught.