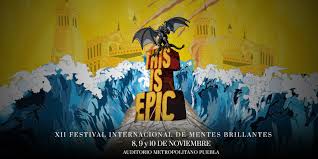 Each year, an overwhelmingly young crowd of nearly 4,000 gather for the 3-day event that brings to Puebla some of the world’s most influential thinkers. The energy reaches rock-concert proportions. It is exciting to see so many high school and college students a-buzz with excitement over idea presented to them by some of the world’s leading thinkers. It is an extraordinary event!

In the inaugural year 2008, the motto ‘Don’t believe everything you think’ was introduced and still exemplifies the spirit of the festival. Past events have included talks that challenge our ideas on physics, psychology, cinema, science, mathematics, sexuality, economy, religion, education, human evolution, and has showcased provocative discussions such as ‘Is religion good for society?’ This year’s debate focuses on promotions of pro-life vs pro-choice viewpoints. Andres and his staff don’t shy away from controversial subjects.

The Festival offers 20-minute talks, as well as debates and interviews, with virtually something for everyone. There are also musical and artistic interludes to showcase exciting talent. The unique event’s artistic and cultural program that includes short films, artistic interventions and music throughout the festival, and frequently features local Mexican talent.

If you won’t be able to make it to Puebla to attend in person, all the talks will become freely available on-line, in keeping with the conference organizers’ goal of bringing exciting—and Epic!—ideas to a global audience. Talks from prior years are also available on the La Ciudad website.

The festival also features a cartoon contest, as well as a social entrepreneurship pitching opportunities. Pitch@Palace, under the auspices of HRH The Duke of York, gives budding entrepreneurs the opportunity to connect with those who can help make their business dreams become a reality. Pitch@Palace guides, helps and connects entrepreneurs and early-stage businesses with potential supporters, including a range of CEOs, influencers, angel investors, business partners, and mentors. During La Ciudad de Las Ideas, entrepreneurs from Latin America will pitch ideas with the developers of the best business proposals having the opportunity to attend Pitch@Palace GLOBAL in London, England.

“-We encourage the potential of those who want to solve global problems through high-impact entrepreneurship with a technological and social base.
-We encourage the creation of an international community without barriers of gender, ethnic origin or social class.
-We look for extraordinary individuals that want to change the world through scalable projects, with the power to change the lives of millions of people.”

Innovators from around the world submit applications to Gifted Citizen during the year. The top ten social-entrepreneurship projects, determined by a panel of experts, are invited to become part of La Ciudad de las Ideas, with the chance to meet potential investors and network with CEOs and entrepreneurs. The best project receives a cash prize to help move the business model into the development stage. 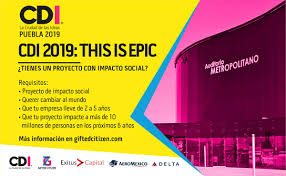 See you in Puebla!